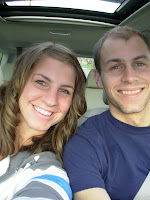 I've got plenty of time to tell my liver story, so what the heck? In May of 2008, I was diagnosed with Primary Sclerosing Cholangitis, or PSC, a rare liver disease that is caused by the inflammation and scarring of the liver's bile ducts. PSC is an autoimmune disease that is only cured by liver transplant. We took the above photo just weeks before my health started to deteriorate, and my diagnosis came. I underwent several endoscopies, a colonoscopy (fun stuff) and a liver biopsy to finally determine that I had PSC. We don't and will probably never know what caused my disease. My G.I. at LDS Hospital told me that, given the good shape I was in physically and my young age, I wouldn't need a transplant for about five to ten years, but that was just a ballpark guess. 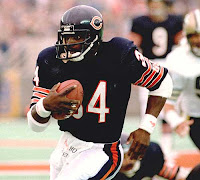 The great Chicago Bears running back Walter Payton, a.k.a. "Sweetness" was killed by PSC when his liver had developed cancers beyond repair. I was very blessed to receive a liver so quickly after having been listed a recipient candidate for only two weeks, giving any potential cancers little or no time to set in.
From my diagnosis in 2008 to late March of 2009, I was able, with the aid of a dozen pills a day, to control my disease's progression and to go about life as usual: working, hanging out with Megan, playing golf and basketball, vacations, all that stuff. I felt great, but now that I look back I was always more fatigued than normal, and couldn't sleep like a rock like I used to. Then in late March, I started to get terrible headaches. I was super tired all of the time. Even though I knew that I had this liver disease, I had felt no effects from it whatsoever during the past ten months, and so I didn't link these new problems to the liver. I began losing a ton of weight, and since I have so much of that to go around, Megan and I were alarmed, especially when 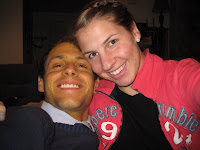 I started turning yellow again. (See photo at right)
Basically, the whole month of April of 2009 is now a blur to me. I was in and out of endoscopies and another colonoscopy at LDS with my diligent G.I., and he had no idea why I was so sick and why it had come on so suddenly. So he decided that I should go and "get acquainted" with the liver transplant team at the new Intermountain Medical Center on 53rd and State. We had an appointment for the 9th of April, but Megan (she's so awesome) said on the 1st, "Why don't you call and see if they can see you tomorrow?" So I did, and they said they had an opening, which proved to be just one miracle among many. We met that day with my liver coordinator/lifesaver/our new best friend Rosemary. She basically quarterbacks the whole process of listing a new patient to be a recipient to seeing them through months to years after the transplant surgery. When we first met, she explained this whole process quickly, and told us to come back later that day to meet with the physician assigned to me, and the surgeon who performs all of the liver (and kidney) transplants for IMC. When we met the surgeon we were somewhat blown away when he told us that, given my drastic jump in liver levels and how sick I'd been, I would need a new liver as soon as possible. I was stunned for a second that this day had come so much sooner than was expected, but then I figured "well, I've known for awhile that I'd need a new liver sometime, so it might as well be now." After hundreds of tubes of blood drawn and a dozen other tests, I was officially listed as a candidate to receive a liver transplant on Tuesday, April 14th, and I was told that a call could come from Rosemary at any time to get to the hospital if a liver that fit my criteria became available. I was told that it could be anywhere from a few days, to a few weeks, to a few months before this would happen. I prepared for a six month wait to not get my hopes too high, so I was surprised the following Friday when I was helping Megan haul some flowers into a church for a wedding she was doing when I got a call from Rosemary. She said I needed to be at the hospital within an hour, and that I 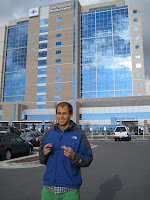 would be a backup (something she had warned me could happen) which means that someone else is the primary candidate, but if the liver doesn't work for them, it would go to me. Megan and I quickly finished up, and went straight to the hospital arriving at 6:30 pm. This photo is of me that evening, hoping above all that the liver would work out for the best candidate. We were admitted overnight, and Megan spent the night with me in the hospital. The surgeons had trouble working out the logistics of where each organ from the donor would go, so it wasn't until 9:30 on Saturday night (28 hours after being admitted) that we got a call from Rosemary in my hospital room, surrounded by family, saying that the liver was going to go to the other candidate and not to me. Overall, that first run was an amazing experience. We learned a lot about how the process would go, and grew spiritually more than we could have ever imagined, as we both cried in gratitude that the other person's life would be saved, and knowing that my chance would come soon. 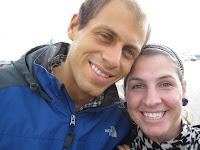 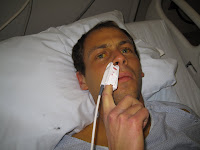 The next week was pretty brutal. I had to get another endoscopy to finish up every detail of the listing process (even though I could have received a new liver without it), and it turned out to be a pretty rough endoscopy. I was nauseous every day that week, and had no appetite. The most nerve racking symptom I ever experienced was when my mind started to slip. A common symptom of liver failure is called encephalopathy, and it occurs when your body isn't releasing toxins properly, and your mind is affected. I was always dizzy, I couldn't construct sentences well, and I was totally dependent on Megan and others to help me with everything. I can handle nausea and other physical pains, but when my mind started to go, I started to get a little nervous.
It was on the night of Monday the 27th of April when I was at my worst. I was nauseous and curled up in the fetal position watching some movie with Megan just hoping that I could get to sleep somehow. I took some Maalox (which Megan's mom Diane went to pick up from the store at 12:30 in the morning) and it worked like a charm. Megan said, "Maybe you'll get a call tonight for a new liver." Then I fell asleep. 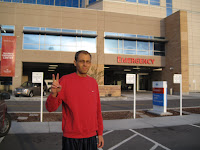 At about 5:30 am the following morning my phone rang, and it was a number I didn't recognize. When I answered there was nobody on the other line. I laid my head back down, and about three minutes later, Diane came through our door and said, "Alec, Rosemary is on the phone, and you need to get to the hospital within the hour." Megan and I immediately got ready and were at the hospital by 6:30 am. I was so delirious, I just had to follow Megan and try to keep up. This picture is me showing that this was attempt number two at a liver transplant. I barely knew where I was, what I was doing, or if the liver would actually be mine. I was admitted, prepped for surgery, and left to wait again on Rosemary's word whether or not the liver would work out for me. After napping with Megan and waiting with family, Rosemary entered my room at 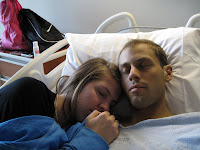 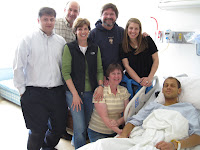 1:30 in the afternoon and said, "It's a go!" We were all ecstatic! I was still so dizzy, but three words had never sounded so good. I was taken down to the operating floor with Megan, her parents and brother, and my parents. I said my goodbyes to them in the elevator lobby, and after crying with Megan for a minute, I said to her, "See you on the other side," (what a stupid thing to say) and she immediately responded, "Of the hospital!" "Yeah," I said, "sorry." I was taken to the OR, and was sleeping within fifteen minutes.
My surgery took nine and a half hours. The surgeons told me that they thought it would go much more quickly since I'm a skinny guy, but that my skin was so thick it was hard to get in and get out, so it took a little longer than expected. I remember waking up in the ICU and could hear the voices of family members. I guess I shot out of bed when I heard Megan's voice. I was in ICU for one day, and then taken up to the hospital's tenth floor to room 1024. 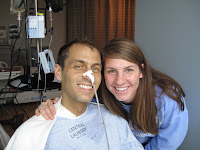 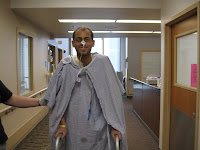 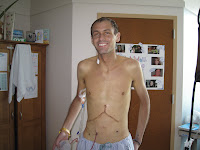 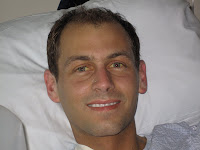 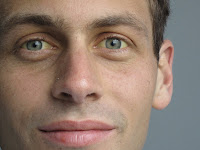 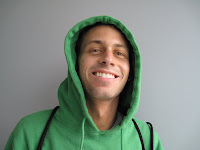 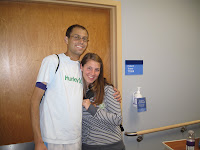 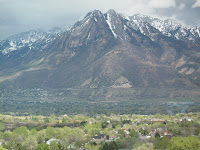 My day-to-day progression until I busted out of the hospital - The view of Mt. Olympus from Room 1024 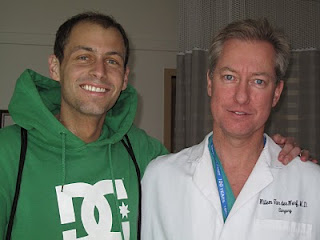 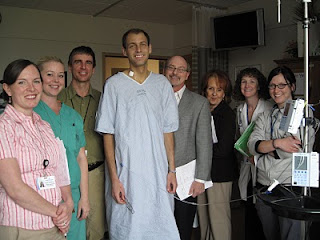 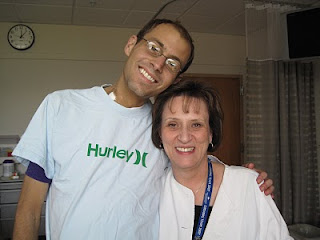 The doctors would visit me daily and check on my progress. I progressed more each day until on Tuesday the 5th of May the head surgeon asked me if I wanted to get out of the hospital, to which I said, "Yeah! Can I go?" He said yes and that I was doing really well. Megan and I were so excited, so we took a long walk around the IMC hospital campus talking with family on the phone and sharing the good news. I was released from the hospital around 1:30 in the afternoon, and the rest is history.
I still get better everyday, and I owe it all to all of the people who have prayed and fasted for me and Megan throughout this whole process. It's been hard, fun, spiritual and a miracle all at once. Now, I can get on with my life with Megan, and I have never been happier. So that's my liver story, and here are some more photos of the whole thing. Thanks for tuning in. 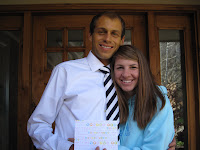 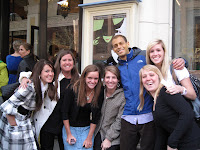 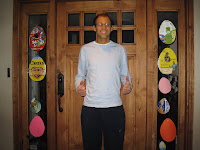 "Egged" by the Hunters 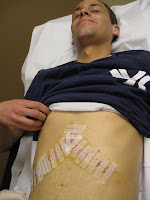 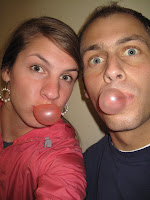 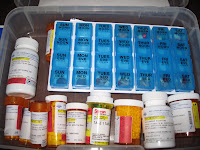 Staples/Stiches out - Bubble contest at the clinic - All my drugs 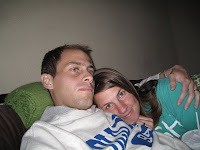